A calibration, or reliability curve, is the standard way to assess the calibration quality of a classifier’s predictions. In order to create a calibration curve, the predicted scores are first binned into discrete intervals, such as deciles. If there are enough observations, more intervals tend to produce better plots. Within each bin, the average predicted probability of observations in that bin is plotted on the x-axis, and the overall proportion of positive labels is plotted on the y-axis. 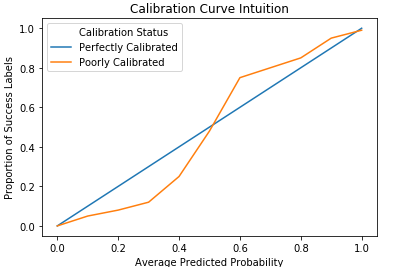