Outlier is a general term for an observation that is far away from most other data points. Outliers are often identified subjectively, but common heuristics include points beyond 1.5 interquartile ranges from the first and third quartiles, or those a certain number of standard deviations beyond the mean. 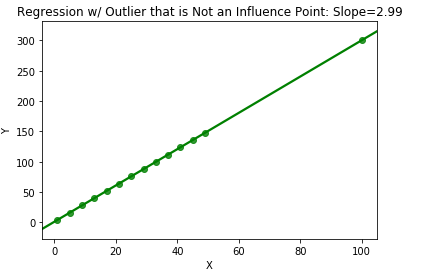 The most common diagnostic for detecting influence points is Cook’s Distance, and points that have large Cook values might need to be investigated further. In the process of data exploration, it is important to verify the quality of the data being captured, as it is often the case that these points are due to issues in the underlying collection of the data.